Christmas was, as usual, wonderful and completely crazy. We may not have had the 12 hour drive to Oklahoma as in years past (Instead it's out to Colorado! See the last paragraph.) but we had the same crazy feeling of having to make sure everything made it from one place to another.

We celebrated our own personal Christmas the Sunday night before. Tim made a super yummy dinner of chicken fried steak, mashed potatoes, veggies, and crescent rolls while I very happily watched. (Don't worry, I cleaned all the dishes later, which is our rule. One cooks, one cleans.) Brenden had already received his gift of a zoo membership but was very excited to open his stocking, which held his ornament and some new books. Tim really seemed to enjoy his new indoor/outdoor weather gauge, fleece hats and gloves and I loved my Cd's and the song my grandpa Halter wrote for me (in 1981) that Tim had framed. 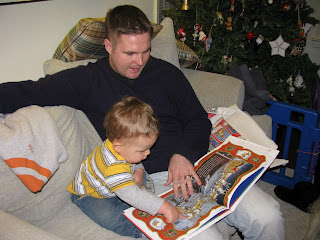 Reading The Night Before Christmas on Christmas Eve
Christmas Eve was spent with my family. We were surprised by a visit from my uncle Mike, aunt Maxine, and our cousins Natalie and Aaron. We then headed to church at 7 pm, which is always interesting with a 15 month old. He wasn't quite as restless as I expected and thankfully the service was only about 30 minutes long so he was back at home and asleep at his normal time, which is now 8 pm. That night Tim and I made pumpkin and apple pies and my mom tried to make a new type of chocolate cookie without eggs. Unfortunately she misread the directions and the first batch wasn't exactly the best. The 2nd, more chocolate-y batch was MUCH better, but that meant that we were all up until at least 11:30 pm baking. Santa was going to be at the house soon so we hurried to bed. 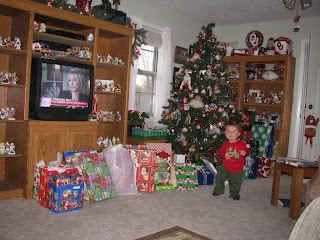 Brenden and the Warehime Christmas Tree

Christmas morning Brenden woke us up happily by yelling "Mama! Mama!" across the bedroom. He waddled in to wake up his grandparents and then told us firmly that it was time to eat. Since it was Christmas his breakfast consisted of a few bites of oatmeal and 2 white chocolate chip cookies. He's not spoiled at all, right? By 9:30 am the rest of us were ready to eat and open presents but we were one great-grandma short and had a tired toddler on our hands. We eventually got great-grandma into the house and settled on the couch and decided that Brenden should open his presents and then we would eat and open ours after he was down for his nap. He really loved getting toys out of his stocking again but once his new cell phone was unwrapped he could have cared less what we showed him. He did stop a few times to push some buttons on his other toys, and he did push his new toy vacuum , complete with sound but unfortunately no sucking action, around the living room. Of course he did all of that with the phone securely clutched in his fist. We were all extremely spoiled that morning, both by gifts and lots of biscuits and gravy, and Tim and I are well on our way to getting a computer. 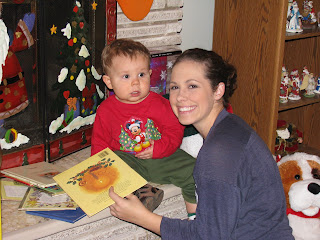 A quick note: It's not a holiday at the Warehime house unless someone heads to the ER and this year it was grandma Warehime's turn. On Tuesday her cat Morris bit her, which is extremely unusual. Her poor wrist was swollen like a summer sausage, red, and hot. My mom took her in after we left and they gave her a shot of penicillin, which I hope takes care of the infection quickly. She doesn't seem too upset or in a lot of pain and the doctors weren't overly concerned, but what a wonderful way to spend your day, right? At least no one lost a fingernail to a belt sander...ask my dad about that someday. (Unplug the sander before changing the pad!!!)

After Brenden woke from his nap and we shoved some lunch in him we drove to Mike and Connie's house for the rest of Christmas day with the Hagan side of the family. Lunch was awesome and Brenden was much happier at this large gathering than he was at Thanksgiving. He entertained the table with his ramblings and laughed like a hyena at Papa Dan's funny noises. We then got to work opening another batch of presents. Brenden became very attached to his new fridge word builder toy until his tricycle was unwrapped. I had no idea he would be so excited. He hopped right on and even tried to push the pedals, although not very successfully. Even more exciting for him was using the screwdriver and the nut driver to move the seat. He's going to be taking apart the toaster and the lawn mower before we know it. 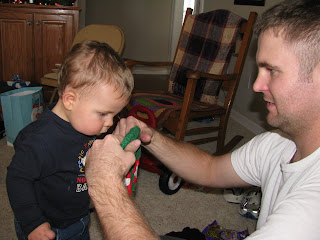 Anything else in the stocking?

So that's 3 Christmases down, 2 to go. On Monday night we're celebrating with the Kelly side of the family back at Mike and Connie's, and on the 30th we're headed to Colorado to see Karen, Rick, Pat, Jason and Chrissy. We are so excited to see everyone and so blessed already. I hope you all had a very Merry Christmas full of happiness and love, and no trips to the ER. 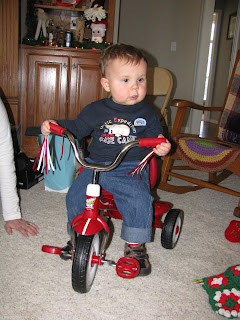 Learning to ride his new tricycle!