Oh my goodness, it's our 100th blog. I still cannot believe I have typed 100 long, mostly boring stories, usually about Brenden. Ok...Tim typed maybe 2. :) Still! We've kept it up! And I'm so glad we have. It's nice to look back and remember what happened. It's nice to have a journal of the things I don't want to forget. And it's nice to have people coming along on the journey with us. So, thank you!

For our 100th blog I decided it was time to share the story of how we became "The Kelly Family", which did not happen when Tim and I exchanged rings. Nope, Tim made sure I knew that we were not "a family" until we had children. Oh Tim...so silly. But we would definitely not be complete without our Brenden, and we absolutely wouldn't have a blog without him to give me things to write about. So this is how he came into our lives. (Thank you, AGAIN, to Heather G. I will continue to steal your good ideas as long as you have them...so for a long time!) 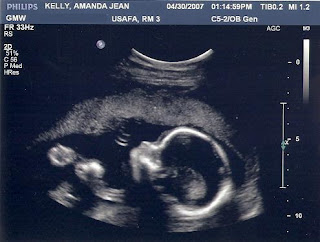 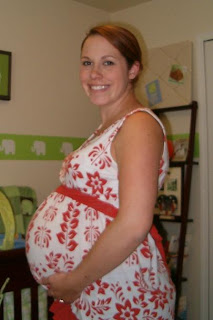 39 weeks...ready to be done!
Our first trip to the hospital happened when I was 8 days shy of my due date, at roughly 3 am on a Sunday morning. I started having contractions and they were within 5 minutes of each other. They had said, several times, in our baby classes that for first time moms you had to wait until the contractions were at least 3 to 5 minutes apart. I was there! So we called and the lady asked if I could still breath/talk through them. Um...yeah. So? Unfortunately that was their test for when I could actually come to the hospital. Darnit! They said to take a shower and if they labor didn't subside to come in. Off to the shower I went to sit and see if the hot water would relax me. When the contractions didn't stop (I was willing them to keep going...I was done with being pregnant!) we headed in. We didn't take my suitcase in, just in case they sent us home and I'm so glad we didn't! It would have been awful to have to take it back out with no baby to carry with it. After hooking me up to the monitor and making me chug a ton of water they told me I was indeed in pre-labor and would probably go into real labor in the next few days. Back home we trudged, with orders to drink lots of water and WALK. We call that our "trial run" now.

I thought for sure we'd head back the next day, but unfortunately nothing really happened. My contractions were sporadic and even if they hurt they didn't last long enough. I went to my next scheduled appointment on Wednesday and I still remember the receptionists staring at me strangely. I finally asked if something was wrong and they told me they were watching my stomach contract. Every time it did you could see the outline of Brenden's back, butt and legs. Not to where you could tell what they were, but enough to where it made my stomach look very strange, almost square. When I finally saw my OBGYN she told me I was 2 centimeters dilated and that she didn't expect to see me the next week and wouldn't be surprised if I was back at the hospital that night. Stupid lady...giving me false hope.

Thursday, Friday and Saturday rolled around with no change. We walked, a lot, and I was felling really cruddy on Saturday, but nothing new. Then, at almost exactly 3 am, I woke up to go to the bathroom for the 153rd time and my water broke. At least, I was pretty sure it broke. I had never been through labor so who knows what else it could have been. I woke up Tim, who didn't wait very long to jump out of bed, get dressed and pack us in the car. My parents had come to stay with us a few days before so he woke them up so that they could come with us. Then the texting and calling commenced. I think we had at least 40 people to contact. Next time, look for information on facebook or twitter. HAHA!

On our way to the hospital we realized we had forgotten a book that the staff requested we bring. It was some random book of information that we NEVER used but they wanted us to have it so we went back to get it. Our trip to the hospital, that should have taken roughly 20 minutes, ended up taking at least 40 min, so we made it there around 4 am. Then the contractions really set in.

We had no problems getting through the gate at Ft. Carson. They don't hold people up when they know you are in labor. I was whisked into a birthing room and instantly hooked to all sorts of things. They verified that my water had broken and asked if I wanted any medicine. At that point I was fine, but they were concerned with my blood pressure. Throughout my entire pregnancy I was okay. I never had problems with blood pressure, blood sugar, severe swelling...nothing at all. They were so concerned that they started taking blood, which left me with a nasty bruise on my arm for 2 weeks. (Blood pressure cuffs going off every 3 minutes + blood being drawn = BAD) At about 7 am they checked me again. I was still only 2 centimeters dilated, the same as I had been a week before, and I started begging for an epidural.

I'm not sure if it was the fact that I begged enough, or that my blood pressure was so high, or that I didn't dilate, but they gave me the OK to get the epidural. By 7:30 am I very calmly (or so I thought) told Tim to find the anesthesiologist and get him in there RIGHT NOW. When he went to the door he found him right outside and I danced a jig in my head. That guy was fabulous. In about 10 minutes I was resting comfortably and telling him I would name my next child after him. (His name was Craig...not sure if we'll use it. hehe) Tim almost made it through the procedure but about halfway through, right before they were going to put the needle in, he had to sit down and look away. I'd make fun of him for it but he did great the rest of the time.

The doctors double checked to make sure the epidural was working and then told me to get some rest. Between the adrenaline rushing through my system and the iv in my arm that was burning due to the antibiotics I had to have (I'm group B strep positive...and no, I don't know exactly what it is) there was no way I could sleep. Tim did nap a bit and I texted a bunch of friends. Around 10:30 am the nurse checked up on me. My mom was in the room when the nurse announced that I was ready to start pushing. Um...WHAT?!? 3 1/2 hours ago I hadn't changed at all. All hail the power of a good epidural!

I didn't end up pushing until 11:30 am. The lady next door to me was having her 4th child and the midwife didn't think she could wait. I wasn't in any pain and had no urges to push so I told her I was fine. When I finally did get started it wasn't as hard as I expected. I think the fact that my epidural was still so present in my system made it feel kind of surreal. The only thing I clearly remember is one of the nurses asking me if I wanted to feel the head. I did, and then she asked if I could see it. Yeah, no lady, I'm not a contortionist. I think she forgot that the mirror they were going to bring in was broken so I didn't have anything to look with. It was funny to me, though!

At 11:47 am, almost 9 hours after my water broke, Brenden Michael David was born and we were "officially" a family. Tim, who I thought would pass out at at the mere thought of cutting the cord, performed like a pro. Brenden received his first bath and began the process of meeting our family. 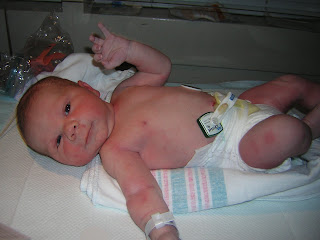 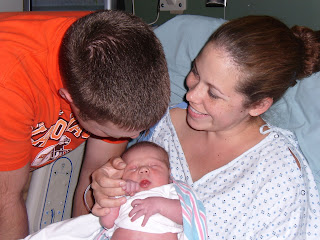 The Kelly Family
A little over a year later this blog was born. And if you made it this far through the story I have to say THANK YOU! Thank you for reading our stories and sharing in our happiness and frustrations. We hope to keep sharing for a long time. :) 200th blog here we come!

That was beautiful! I think you've convinced me to get an epidural for my next birth. ;-)

Since I've been looking at pictures of Brenden since he was born, I can really see that he looks nearly exactly like himself from that sonogram picture and even at birth! He's grown older, but he still looks the same! Wow - such a handsome guy... :-)

Your next birth?!? Has Tony been advised of this??? :) hehe Seriously, though...the epidural was amazing. I'm going to request it as soon as I walk into the hospital next time.

He really does! Especially his big, old noggin'. :) And thanks!