What does new sod, bad drainage, water, two kids and a bunch of mud equal?

Apparently, a lot of fun. :) (And a LOT of laundry and baths) 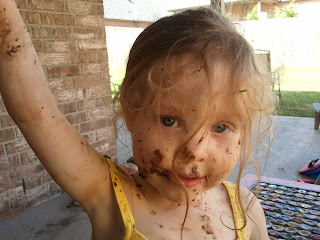 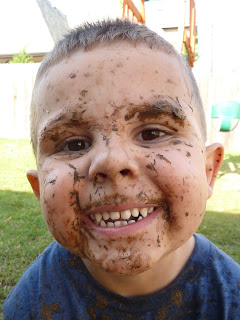 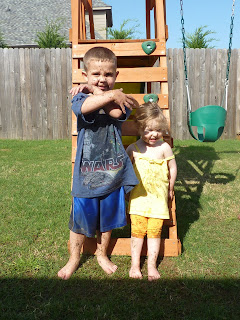 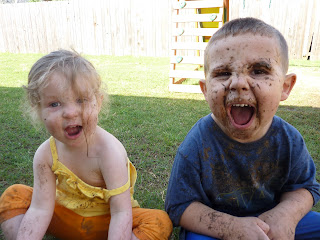 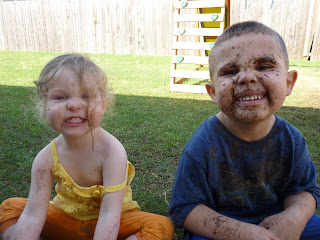 Ah, the joy of two children playing outside, mostly nicely, :)

I'm not sure what came over me a few weeks ago but I decided that it was time for Lauren to graduate to a big kid bed. Maybe it was the fact that she took a nap in her "castle" and I didn't want to lose momentum. Maybe I was tired of leaning over the side of her crib. Maybe I was excited to see her wander into our room in the morning. Whatever it was, I grabbed an allen wrench, popped the side off, and figured out a way to make the toddler railing work.

All day I talked the big girl bed up to Lauren. She would be a big kid like Brenden! She would be able to get up in the morning and come and get me! It would be fun! The first few days, she was perfect. She fell asleep with no issues in the afternoon and at night, stayed in bed, and was happy to wake up and tell me "Did it myself!"

Of course, that couldn't last. She realized one afternoon that getting up and playing with her toys was much more fun than laying down and closing her eyes. Much screaming, flinging of toys, and kicking ensued. I'm not sure when she decided to quit fighting it (and I'm sure now that I've said that she'll be a mess again) but eventually she started staying in bed again.

We did start a routine with her, much like we've done with Brenden, and I think that made a difference. I lay down with her and we "read" her color book, then I rub her back and sing the song "Sing". (She knows all the words, too) She may still get upset, and sometimes she will get up and wander, but it doesn't take more than a quick look to get her scrambling back into bed.

I'm very proud of how well she's doing, but oh my goodness she's growing up too fast! Hopefully potty training won't be the nightmare that I expect it to be.

After months of doctor appointments, test taking, whining, logging my sleep history, more testing, a lot more whining, etc, I finally have a diagnosis for my crazy exhaustion. 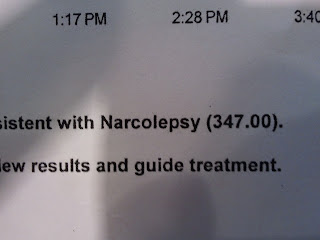 No, really. I have it. Not the fall down in the middle of a sentence and start snoring (a la the Narcoleptic Argentinian in Moulin Rouge or that chick in Deuce Bigalow) or the type where I have to wear a helmet because I may hurt myself, it just means that my body doesn't make enough hypocretins (orexins).

Hypocretins (orexins): These neurotransmitters are involved in the regulation of the sleep/wake cycle as well as other bodily functions (e.g., blood pressure and metabolism). Further research has shown that the majority of hypocretin-producing cells, located in the hypothalamus, have been destroyed in the brains of those who develop narcolepsy with cataplexy. Scientists have confirmed that narcolepsy with cataplexy is caused by this loss of hypocretins. The cause(s) of narcolepsy without cataplexy are unknown. Further research is needed to determine why hypocretin cells are destroyed and to identify the exact trigger(s) of both forms of narcolepsy. (found via NarcolepsyNetwork.org)

I don't have cataplexy, which is the sudden loss of muscle control and happens in more extreme cases, but everything else fits. I also have Circadian Rhythm Disorder, which just means that my body wants to fall asleep later at night and not wake up until later in the morning. (Um...so that's why being a bartender was good for me) My doctor decided my brain is on California time while my body is in Oklahoma. Nope, I'm not an insomniac. I just live in the wrong state. :)

Looking at my sleep test was strange. When I thought it took me a long time to fall asleep, it really only took a minute or two (and one time only 26 seconds!) and I was surprised to see that I slept during all 5 naps. I also experienced REM sleep 3 out of the 5 naps, which is really what solidifies the diagnosis. Most people without a sleep disorder would not hit REM sleep within the 20 minutes I was allowed to nap. I showed very little time in NREM (non-REM) sleep, which was an Ah Ha! moment for me. I often have nights where I feel like I don't get any sleep because I'm constantly dreaming. Makes sense!

So we just take some hypocretin replacement pills, right? Wrong. They haven't figured out how to effectively do that, yet. Instead I'm taking medication to help "wake up" the rest of my body and hopefully make life easier. So far, I just feel kind of out of it, but that should subside in a few days. I just want to have one day where I feel what other people's "normal" feels like, and not my "normal", which includes headaches, an absolute need to sleep, and grumpiness associated with it all.

So if you see me nodding off or yawning during an important meeting or when you're trying to tell me something I absolutely need to know, please don't think I'm being rude. My brain just hates me and has killed off my lovely hypocretins.

Fingers crossed that the meds help and that I can get some kind of relief soon.

As my mom mentioned to me the other day, I haven't posted anything in a very LONG time. Sorry! I've just been busy being busy. Kids, house, husband, trips, beautiful days, testing, doctor appointments, mud, fence, lack of sleep, too much sleep, headaches, more doctor appointments...yeah. So here is the condensed version of what we've been up to: 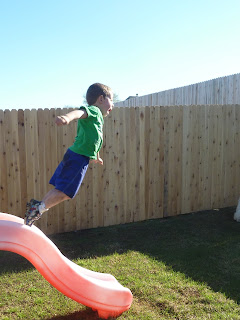 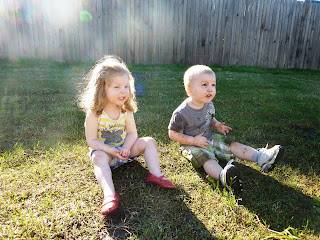 Looking over this list, I realize that it looks like all I did for the past few weeks is relax, sleep, and then relax again. I'll understand if you're jealous. However, I will also let you borrow my very-much-into-her-terrible-twos-and-teething little girl. You may not be so jealous after that. :)

Every year the kids have an Art Show at their preschool and Lauren is finally to the age that she has a vague idea that she did something that we want to see and is proud of herself. They both did a great job and were super excited to show us their work.

I hope their next schools include things like this. 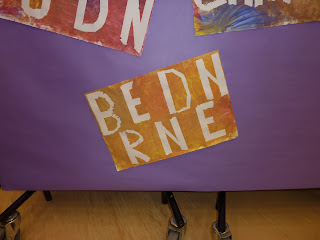 Zzzzz (Alternate Title: Did my doctor just call me stupid?)

I've had a bad relationship with sleep for as long as I can remember. I have a very vivid memory of watching the clock all night when I was about 7 years old. Add to that the fact that I loved reading and had no problems staying up late to finish a book in one night and you have one sleepy me.

I've never understood how someone could fall asleep reading or be able to pass right out after closing their eyes. (Yep, Tim does both of those all the time.) I can't count sheep or just "stare at the back of my eyelids" until I drift off. My brain has to be exhausted or it takes me hours to fall asleep.

I asked my doctor for a referral to a sleep doctor and they got me in as soon as they could...THREE MONTHS LATER. I have never known a doctor to be so busy. The day of my appointment was insanity. I was given the wrong address completely and ended up having to drive all the way back across town to his second location. I was sure he would end up being rude since I was almost 30 minutes late (I've had some bad doctors in the past, obviously) but instead he was extremely nice and apologized for my inconvenience.

He recommended a sleep test to see if I was experiencing sleep apnea, had strange sleep patterns or any number of awful sounding things that could cause my exhaustion. After a lovely night with a million wires and barely any sleep the test showed that I have hyposomnia, which means it takes a really long time to fall asleep. I'm pretty sure I already knew that, which was ridiculously frustrating.


At my follow up appointment, which took another MONTH, he explained that there are two things that he thinks I could be suffering from, a mild form of Narcolepsy or Idiopathic Hyposomnia. That was the point where I asked if he had just called me an idiot. Thankfully, it just means that I'm tired all the time but they don't know why. Helpful! To figure out which it is I get to take yet another test, an MSLT (Multiple Sleep Latency Test) which is done during the day. I'm going to hang out at their sleep testing center all day and every two hours they give me a chance to nap for 20 minutes. I'll get more sets of wires, although not as many, which is one plus I guess.

I'm not sure what the treatment will be or if it will even help, but I do know that I'm tired of being tired and over feeling like my head is swimming. I'm not sure I've ever felt rested and I'm ready to know what that actually feels like. Who knows, maybe I'll become the awesome mother, housekeeper and cook that I've always hoped to be.

Or maybe it will make me even crazier. Either way, more energy = GOOD. :)

When Brenden was younger we were never able to watch Wipeout with him in the room. He would freak out and cry every time someone fell, which was especially confusing since he fell down on purpose all the time and thought it was hilarious. I'm not sure when that switched but it's safe to say that Wipeout is now one of his favorite shows. (And game to play on the Wii)

One morning this past week he decided we needed an obstacle course in our living room and that it had to include Big Balls, mud (pretend, thank goodness) and Smackers. He grabbed all of the couch cushions and pillows and flung them about and called it good. Both kids had a blast bouncing, falling and pretty much acting like fools.

I didn't get many pictures of Brenden in action because he kept requesting that I be a "smacker" which means I waved my arms around and caught him as he ran by.