To all the wonderful men in our lives...we love you! 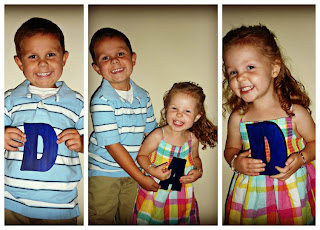 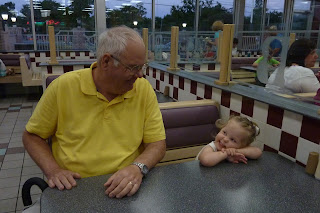 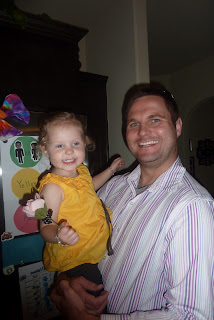 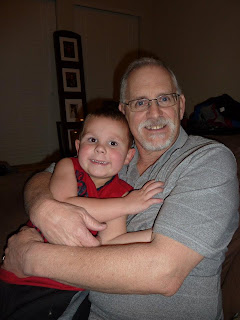 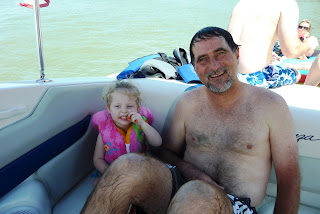 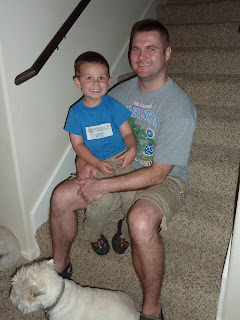 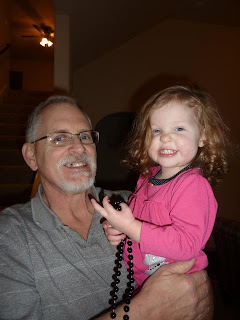 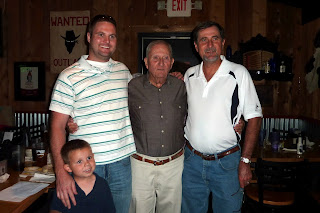 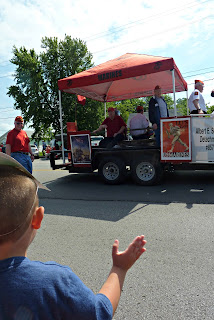 "Small boy's definition of Father's Day: It's just like Mother's Day only you don't spend so much."
~Unknown

Oh yes...a lot has changed in a year.

So we have longer hair, new house, a few more wrinkles (mine) and gray hairs (also mine) and a million more awesome memories.

The last day of school, Brenden wasn't feeling so great. By dinner time he was lying on the floor, lethargic, and burning up. I packed him into the car, which he was extremely upset about, and headed over to the after hours clinic.

Thankfully it had just opened and was completely empty. We only waited a few minutes before we were walked back into an exam room. I was not at all surprised that his temperature was 103.3 and they immediately gave him some ibuprofen. However, I was definitely surprised they sent in a nurse that had obviously not had much experience in swabbing children's throats for strep. Not 5 seconds after he finished, and conveniently right after he left, Brenden started throwing up all over the room. The poor guy couldn't stop. I felt so bad for him!

It wasn't long before the results were back...positive for strep. Poor guy! Unfortunately for him (and fortunately for me) his doctor recommended a S-H-O-T (yep...she's smart and spelled it out) and I completely agreed. Ten days of oral medication to stop him from throwing up and then for the strep or one shot? He was not at all happy with my decision.

And now you're wondering why I titled this post "One Wish Granted". Don't worry...I'm getting there. :)

We decided a long time ago to never lie to Brenden when it came to what was going on at the doctor's office. I want him to trust me, even if it means he's going to be upset with me. And believe me, he was very upset with me. I decided that this rough day deserved a big reward so I pulled out the big guns. "Brenden if you can be brave and get this shot, not only will you feel better but I will order you a Hydro Bow."

The change in his attitude was immediate. "Really, mommy??? My very own? Um...okay."

He was still upset about getting the shot, but not quite as much as he had been. I think I was more upset that the not-so-experienced nurse was the one they sent in holding the syringe. (With someone to explain how to administer the shot...seriously?!)

I'm pretty sure I don't have to tell you just how awful that shot was...for everyone involved.

Five minutes later he was a different kid. He wasn't quite as feverish, he was smiling, and high-fived the nurses when they came back into the room. Somehow I even got him to agree that the shot was a good idea! He also wanted me to show them the Hydro Bow on my phone and made sure they knew he was getting it because he was "so brave!"

This weekend, he got his reward. :) 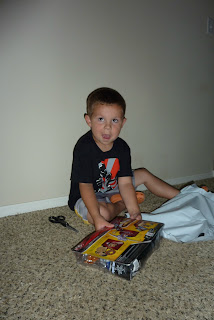 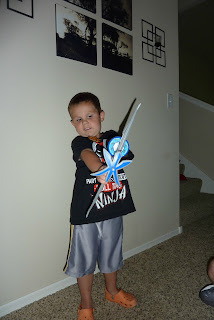 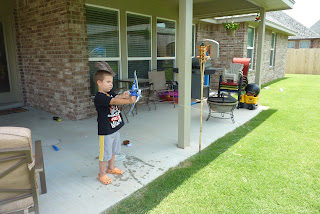 As I sit here typing this post, my eyes are trying to close. The neurologist I visited about my migraines (Which are SO much better after seeing the chiropractor that he thought I was crazy to keep my appointment. We ended up talking about the Army and politics.) called what happens to me "sleep attacks" and that is the most accurate way I can explain them. I'll be doing something normal and then BAM...I have to sit down and if I'm not careful I start nodding off. I can start off a day feeling completely energized and ready to take on the world and within an hour I can barely force myself off of the couch.

In short, this SUCKS.

My first medication, Nuvigil (which sounds like a feminine product to me...eww), definitely made a difference, but it wasn't in a good way. Yes, I had more energy. So much energy that I could. not. stop. moving. It was terrible. It got to the point where I was having anxiety attacks and was so shaky that I had to bounce my legs for hours. Yep, that medicine was out.

The medicine I'm on now, Focalin, is primarily used to treat ADD and ADHD. This strikes me as funny because my brother was on Ritalin for years to treat his ADHD and when it would kick in you could tell because his body would slump and it was almost as if he was in a trance. It's supposed to have the opposite effect on me, which it has, but not with great results. I knew it was speeding up my heart rate and my blood pressure, but I didn't expect it speed up my metabolism. Sounds like a great side effect, huh? Not so much for my crazy body. I'm not losing weight, but I am metabolizing other medications more quickly. It's really bad when you're on Zoloft for anxiety and depression and one of your main symptoms is fatigue and weight gain, which have been fine for months, and now...awful.

(Side note: I'm not sure I have PPD but rather actual anxiety/depression. I don't think I'll ever be off of antidepressants, and I'm okay with that. When I'm on the right dose, I feel normal...which is amazing.)

It only took a week or so on the Focalin for the depression to kick back in, but I didn't recognize it at first. I thought it was a normal PMS type thing and boy was I wrong. When I continued to get worse, could not kick the weepy, unmotivated feelings, it became obvious that I'm not where I should be medication-wise. Off to the doctor!

Me: "I'm on doctor prescribed speed and I'm gaining weight. I think I'm the only person on the planet that has this ability. Also...help?"

Up goes the dose of Zoloft, which I am now maxed out on. Not sure how this will go, but at least we're making changes and I won't be stuck in this awful hole. I hate switching medications so my fingers are crossed that this evens me out.

Until I'm where I should be, please forgive me if I lose track of time, fall asleep when I should be doing something important, or cry for no reason at all. I promise, I'm working on it.

How about some cute kids pictures to make up for it? Okay? Here ya go! 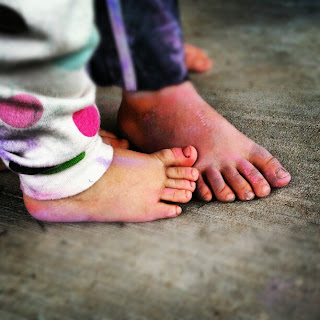 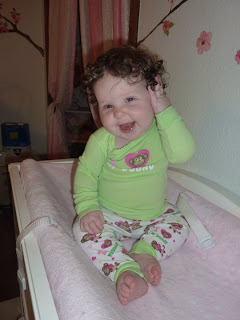 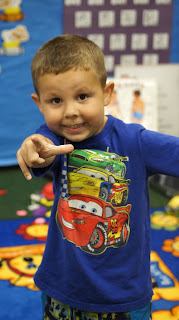 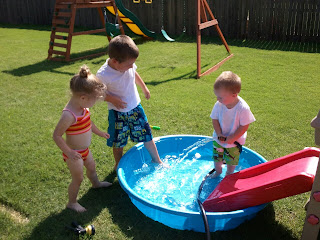 The thought of Lauren being old enough to enroll her in dance makes me ridiculously happy and completely weepy. Where is my tiny baby? Where did my serious little girl go? Apparently she's been replaced by a moody, screaming, opinionated teenager that is trapped inside my 2 year old's body.

I knew that the morning of dance class would be exciting for many reasons and Lauren did not disappoint. She was okay with the tights but as soon as I pulled on her leotard (with the sparkly tutu...what little girl as girly as mine hates a sparkly tutu???) she was in full on drama queen mode. She flung her self down, flailed, kicked, screamed, and yanked at her outfit. "No! Don't want it! TOO SMALL! NOOOO!"

I was already prepared for this reaction so I grabbed my camera, snapped a few shots of her tantrum, and loaded her in the car. Ignoring her outbursts is usually the best idea for everyone involved. 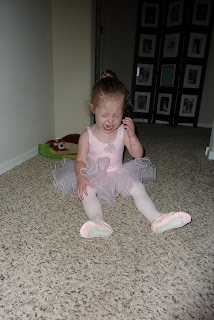 By the time we drove into the parking lot at the dance studio she was just fine. She recognized the building and started saying, "Dance, dance. I want to dance." over and over. Of course she pulled the "shy" card when we first walked in, but that lasted all of 3 seconds. From then on, she was a happy, dancing princess. 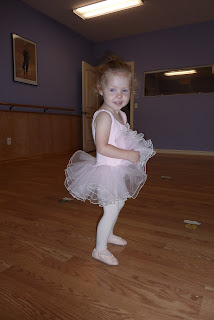 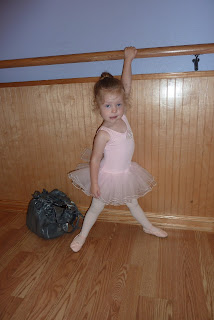 She paid attention, danced to every song, and had an all around fantastic time. I'm so excited that she loves it and actually participates. I hope we can keep this up for a long long time. 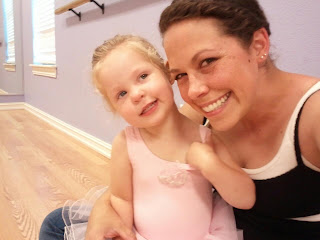