Getting To Know You

The list of things that I didn't know, and still don't know, about parenting is ridiculously long. At least once a day, if not more often, I'll think, "Wow. I had no idea that would happen." One of the craziest things, at least to me, came along with naming our kids. Both of them were named before they were born, although we picked out Lauren's a lot earlier. Both of them were called by their name before we had even seen them, which I believed would make their name "stick" more easily. I was wrong.
I'm not sure if this is something that every parent feels, but when my kids were born it was hard for me to call them by their names. It just felt wrong! Like I was calling a stranger the wrong name. Most people would probably say "You obviously gave them the wrong name, then!" I don't think that's it at all. To me, this is a new person who I've never met before. When I meet new people I often find myself second guessing how I'm saying their name, or if I'm even calling them the right name. That feeling extended to my children, which surprised me.
I thought that when my children were born I would know them. I would look at them and automatically feel a connection like I've known them all my life. For me, it wasn't like that at all. I loved them both completely, with all of my heart, but they were still a completely new person in my life, just like Tim was at one time. I didn't know what would make them happy, what would make them laugh. I didn't know if they liked being held when they ate (Brenden) or laying flat on their back while they had their bottle (Lauren). I had to get to know them, just like I have had to get to know everyone in my life.
I just realized the other day that Lauren knows her name. She's probably known it for a long time but I wasn't noticing how she responded. At the same time, I realized that it no longer felt strange to call her Lauren. It felt like she had finally grown into her name, but that's not really true. She was always meant to be Lauren, just like Brenden was always meant to be Brenden. I just know them now.
I know that Brenden likes to play peek-a-boo before he falls asleep. That when he says "Harry Potter's at Walmart" I'm supposed to say "Nooooo" and then we'll both giggle our heads off. (Don't ask. I don't know how it started.) I know that Lauren wakes up happy. If she starts fussing and she's been awake for about an hour, she's tired. If she starts fussing and it's been less than an hour than she probably just wants to stand up in her exersaucer. (Miss Independent!) I know what makes her giggle. I know her.
It's amazing to feel this way. It made me feel like I'm a good mom when I realized that she hadn't cried in a few days. Of course, part of that is the fact that she's a great little kiddo, but part of it is the fact that I know what she needs long before she gets to screaming.
Getting to know my kids has been one of the most difficult and most rewarding things I've ever done. And now that I know them, I wouldn't change a thing about either of them. 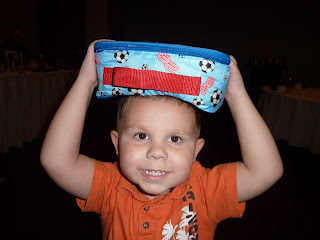 He was always meant to be our Brenden... ...and she was always meant to be our Lauren.

I've never thought about it that way, but it's true. We get to really KNOW our kiddos. What a wonderful post!! Thanks for opening my eyes!

I love this post. So sweet and beautiful. From the way you're describing it, I'm betting I'll be the same way when it comes to naming and getting to know a child someday. Thanks for sharing!