I can’t believe it’s been over three weeks since Rick was admitted to the hospital. In some respects it seems like we have been living here for months. In others, it’s like just yesterday we were unpacking from our trip to Tennessee.

The past 7-10 days have really been rough on Rick. They had to start giving him pain meds to make him somewhat comfortable. His throat hurts so much it’s hard to eat and the fever just won’t go away. His white count just isn’t there to help fight everything, so they put him on every known antibiotic, antifungal, antiviral they could to knock the bad guys out. His platelets dropped last Sunday, and his red blood count went right behind them. They had to give him transfusions every day of one of them. These were all expected things, and they warned us he would have to have them at some point. But in the back of your mind, you held out hope he wouldn’t. Friday was the first day he didn’t have to get one. In the middle of it all, he had a terrible reaction to one of the meds which caused an itchy rash all over his body. On a good note, he actually started to have a white count which is a sign that things are going to turn around. We are all just trying to make him comfortable to get through the rough patch and get him home. It’s probably going to be at least another week or so before we can start planning for that.

We continue to be amazed at the nurses and staff here. They all are so concerned and check in on Rick even when they aren’t on this floor. Even Abraham the “flooring engineer” stops by every day. I drop a package of goodies at the desk each day to thank them. They think it is a bribe, but I don’t think you have to bribe them for anything here. It make such a difference when you know it’s not just a job…they truly care.

His room is turning into a photo album of grandkids, cards and Packer gear. Kay and Jeff sent him a Packer care package which perked him up! Every card, letter and phone call is greatly appreciated. I think I’ve told more than one person that we will need a small U-Haul just to move out of this place.

Look for something wonderful and positive on my next update!!! I know it is coming. 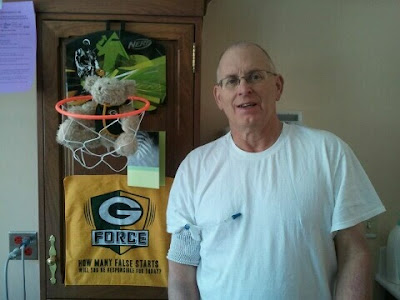