This weekend actually started on Friday, which usually means a nice, long weekend. Yeah right! That morning the semi showed up with 8 packing crates of stuff and I almost told them to take it back because I was sure it would never fit. (the house is only 900 sq ft...thank goodness for the garage) I guess it was a little late at that point, so after they blocked off a lane of traffic with a couple of measly orange cones they set to work. And by work I mean: unload one crate, pause for 15 minutes of smoking. It really didn't bug me at all since they showed up at 8:15 am and unloaded things pretty quickly. By 11 am they were done and we had a house full of boxes and only half and idea of where things should go. Thankfully we had the whole day to get things done since Brenden spent the whole day with grandma Connie. He definitely enjoyed himself, especially after an entire scoop of ice cream at Braums. :) While unpacking we found that a few picture frames are broken, our lampshade is ripped and we have a tear in our couch. Most of our electronic equipment is gone, including our surround sound speakers, their stands, our receiver, and VCR. We're also missing some random things, like the shelves to our entertainment center, the glass tray for our microwave, and our sugar bowl. We'll have to fill out a bunch of claims forms, but there are definitely worse things than a few missing household items. (We were reminded of this on Saturday.) By 7 pm Friday night we were more than tired and decided to call it a day. We thought we'd be spending the night at our new place on Friday but that just didn't happen.

Saturday morning Tim left early so he could be at the house to meet the cable guy by 8 am (Who didn't end up showing up until 4 pm. The poor guy was completely overbooked! By the time he left our house it was 6:30 pm and he had 2 jobs left.) My parents met me at Mike and Connie's to take Brenden with them for the day so we could try to get the rest of the boxes moved out of the way. I borrowed my parents Tahoe and they took our Explorer since it has the carseat. At about 10:40 am I called my mom to see how Brenden was doing. We are trying to shift his naps to later so I was curious to see if he had stayed awake. At first she didn't answer the phone, but not a minute later she called me to tell me the back tire of the Explorer had just fallen off, they were all OK, and were sitting in a ditch by Jarrett Farms. I immediately turned around and tried not too speed too much to get back to them...which was the longest 20 minutes EVER. I ended up following an emergency vehicle right to where they had ended up in the median. When I showed up Brenden was with Meredith, Justin's girlfriend, mom was still in the car, and dad was helping the police officer fill out the accident report. Brenden wasn't phased at all, went right to the firemen, and didn't cry until I showed up upset and running around. My mom was in shock and couldn't stop shaking. She had a burn on her neck from the seat belt, but other than that she was OK. My dad wasn't hurt at all. It wasn't until I got there that I realized how very close they were to rolling. My mom realized in time that the car was having problems and started slowing down. They did a 360 turn and skidded into the ditch, which is what stopped the car and popped the front tire. The wheel that fell off actually bounced over the power lines and ended up in a field about 100 yards away. Some people who live there found it for us, completely inflated and intact. After the car was up on the tow truck we got to see the rotor in the back.. 2 of the bolts were still on, but missing lug nuts. The other 3 bolts sheared off. 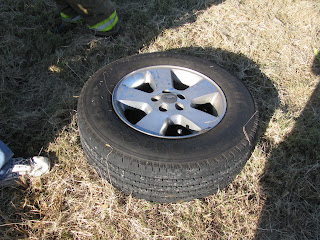 The wheel that caused it all. 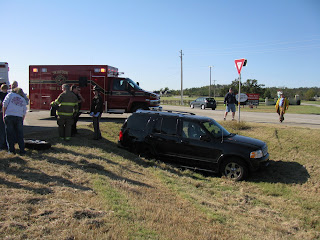 Sitting in the ditch.

We had just had our tires rotated by Tate Boys in Skiatook (you might want to stay away from them) and I had called to ask them to come see for themselves what they may have caused. The highway patrol guys thought it was hilarious to see me rip into the service guy that showed up. I wanted to make sure that they were aware of the situation and for them to understand what their possible negligence put my family through. No one realized that I had 20 minutes to think about exactly what could have happened and exactly who could have caused it. Obviously I'm also upset that our main car is completely out of commission for awhile, that we have to buy a new carseat, and who knows what else is going to have to come out of our pocket to get our car fixed.. To borrow my mom's old line, "We are not made of money." 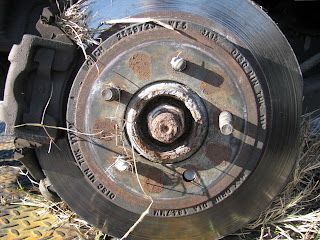 The rotor and remaining bolts.

The most important thing is that everyone is safe. I know that they were being watched over that day. They were going at least 60 mph when it happened but everyone is perfectly safe. Even the highway patrol guys told me the car should have rolled and that they usually have to take people to the hospital when things like that happen. To see everyone walk away with barely a scratch is not luck, it is a miracle.

My parents and Brenden went back to Mike and Connie's house and I headed to our new house. Tim was obviously relieved to finally see someone and was shocked by the pictures. We spent the rest of the day cleaning up and getting ready for Brenden to be able to run around the house, or at least play in his own room. My parents brought Brenden to us (using Mike and Connie's car) ate dinner with us, and left after Brenden was fast asleep. I was a little worried about my mom and how she was doing since she was the most shaken up. She turned to me as she left, laughed and said, "Sorry for wrecking your car!" I think she's just fine. :)

I'm so glad that everyone is okay!